GUITAR,GRASS,GIRLS - FIRST PAGE OF THE NOVEL

Saptarshi Basu, a Gold Medalist in Mechanical Engineering, has been in IT industry for last 8 years and has worked for the top 3 IT companies of India (INFOSYS,TCS & WIPRO). However, writing has always been first love, his passion. His Debut novel- LOVE {LOGIC} AND THE GOD'S ALGORITHM is now a national best-seller in Infibeam, a premier online store.

His second Novel , AUTUMN IN MY HEART published by Vitasta Publishing with Times group launched in november'11 has already created a lot of stir due on causes of broken heart and homosexuality.

Blogging and travelling are the biggest pursuit of him. He maintains a blog called http://saptak-firsttry.blogspot.in/ which had huge following with visits from all over the world. He had subsequently travelled and lived in London, Toronto, San Francisco, Dubai till he came back to Kolkata, his hometown.
Saptarshi Basu also does screenplay writing for movies and columns for some online magazines

GUITAR, GRASS, GIRLS
-
It was about that goddamn letter!  It silently smiled towards him as if it was happy to be discovered at last. For these last six months, Mark Loffler had undyingly devoted his heart and soul to unearth the mystery. And now, frightened and trembling he knew he was very close to it.
It was tough to gather the courage to open the letter. At last Mark did it. Even in the darkness of the eerie night, he felt that it was a bit dilapidated although still unopened. No doubt it was aged and stored in the metallic chest for a long, long time. Drawing a cross over his heart, his hand trembled as he tore open the bluish mail from the US post. A bucolic stench blotched his nose. The letter dated 20th August, 1971 was addressed to Rabindranath and send from a person called Jennifer Houston. Mark’s heartbeat skipped a second .The gushing wind tried to carry the long hidden secret from his hand. Holding it securely, Mark looked deep into the letter. God knows why no one had bothered to open it earlier .More since it was addressed to Rabindranath, one of the most creative musician of his times.
Mark Loffler had no doubt about his creativity as this was the person who had given a new direction to his post doctorate research on Tagore’s music for which he had travelled miles from his hometown in Berlin. Reasons of all kind clamped his mind. It might be due to fear, Mark thought. Rabindranath was a psychedelic person having mysterious connection to the world of witchcraft .The room was dark but the periodic lightning enabled him to read it slowly. The secret was about to be unearthed and he felt he might be cursed along with it. But then, his curiosity has reached to his climax to uncover the truth. Slowly he started mumbling the slanted lexis written by an unknown American lady to an extraordinary Bengali intellectual. 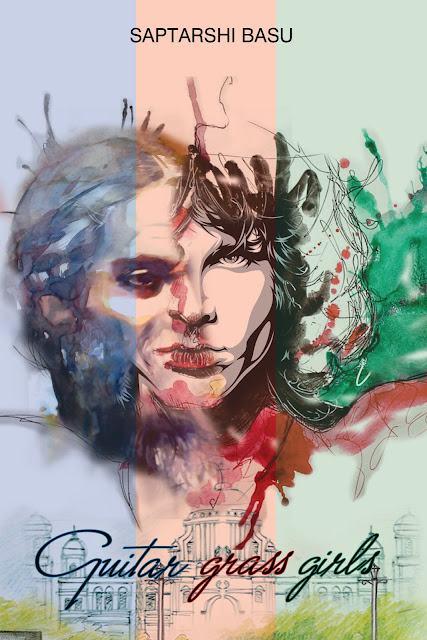 ‘My Dearest, I had not received any letter from you for long. I am really worried about your health. How was your concert, still waiting to hear about it? As for me, I too am having an incredibly miserable time. With profound grief, I have to tell you that, our beloved Jim, who had always reminded me of you, is no more….’
Somewhere nearby a loud lightning struck the Banyan tree. Mark rubbed the droplets of sweat from his forehead. Slowly the secrecy was getting unraveled. He could clearly understand that he was pretty close to solving one of the greatest mysteries which clouded the world of music for centuries. And now, standing on the creepy rumbled house in Bonbihari Dutta Street overlooking the holy Ganges, Mark felt his heartbeat had gone wild.
And then, he wickedly smiled. ‘So…’ he said to himself reading the same lines once more, ‘The greatest Jim Morrison is no more’.
N.B : -   The above work is completely fictitious. Any resemblance to real persons, living, dead or yet to be born is purely coincidental.
Posted by Saptak at 6:44 AM No comments: